What's in an album name? I mean what was Adam Ant thinking when he released 'Dirk Wears White Sox'? Oh that's right, it was 1983. A decade for great album names, like Jermaine Jackson's 'Let Me Tickle Your Fancy'. I can see how the 70s could sire REO Speedwagon's 'You Can Tune a Piano, But You Can't Tuna Fish'. But what was Paul McCartney's excuse with his 2012 offering of 'Kisses on the Bottom'?

So, I'm trying to come up with the name of my new EP. My first album was called 'Amanda Easton'. Well I'd run out of creative energy after writing all those songs! The second was 'Chanteuse' suggested by an audience member. I like that one but the pronunciation caused consternation among radio DJs everywhere who ended up calling it 'Chantoozie'. 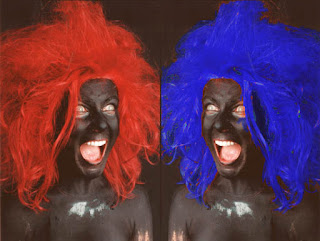 I have been stewing on the name for the new EP for quite a while. Mentioned my dilemma to husband, as he was hanging out the washing this morning. He said, quite out of the blue, how about 'Out of the Blue'? It's the name of one of the songs on the EP and it has double meaning...

Around 10 years ago, during an annus truly horribilis, I felt that my head was on fire so I dyed my hair flaming red. Fast forward to two years ago and life delivered me another corker to send me running for the dye bottle. (At least it wasn't a tequila bottle - we all have our particular coping mechanisms!).
'Blue Velvet' I now am and 'Out of the Blue' is the name of the new EP.

If you'd like to be involved in it, please check out my crowdfunding link: www.pozible.com/amandaeaston and check out this little vid: