In Praise of the local RiSsoLe

Entertainment in RSL, Leagues and Bowling Clubs in Australia gets a bad rap - a proliferation of mother-in-law jokes, and over-ruched and bedazzled frocks are probably to blame. But I think it's time that cabaret became cool again. After all, it doesn't sit too far upstage from Burlesque which is enjoying a major renaissance. Think Marlene Dietrich in a man's suit or the smoky charisma of Edith Piaf rather than bad wigs and over-emoting Shirley Bassey wannabes (don't get me wrong, I love the real Shirley!). I've been thinking about this for a couple of weeks now, ever since I did my own first solo cabaret gig - and loved it. Friends have been telling me for a while that these kind of gigs would be my bag - with your style being so 'theatrical'. It would be rude, after all to actually call me a 'ham' directly.

For many musos nowadays, their bread and butter gigs look like this: three to five sets of 45 minutes each, packed with popular hits ('Play Khe Sahn, ga wonnn!) They're told to set up in the corner of a room usually occupied by the pool table. They're one of many distractions in the room including the telly, the Keno and the pokies. They have to drag in their own sound system, set it up and be their own sound engineer. The crowd in the room completely ignores them until the last song of their final set at 1.05am when they cheer and stomp and beg the exhausted musos to 'play one more, ga wonnn!' The 'backstage' area is otherwise known as the public toilets and they'll get dirty looks for their trouble if they dare ask if the soft drinks are complimentary for the band. 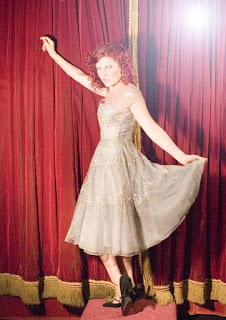 OK, this is worst case scenario - I am very lucky to be mostly playing venues with old school entertainment values like The Basement, Notes, Vanguard, Lizotte's and Blue Beat. And it is this old-schoolness that so impressed me at my cabaret gig. On arrival I was ushered into a spacious dressing room with lights around the mirror. I was offered cold drinks, tea and coffee. I was introduced to the MC, the sound and the lighting engineers. I was welcomed on stage by the more than 600 audience members who were there specifically to be audience members and who proceeded to hang on ever word sung and spoken. They clapped, cheered and laughed appropriately and enthusiastically. After my 50 minute set (yes, one set of 50 minutes) I thanked everybody, picked up my cheque and was home by 1pm - yes, 1 in the afternoon. And on a Wednesday I might add!

After such a pleasant experience, I sent emails to eight other cabaret agents asking for more gigs. Each one replied to my email within 24 hours. If you'd like to come along and see what I'm on about, check my calendar for the gigs I've titled 'Cabaret'. Of course your presence will be helping to bring down the average age of the cabaret audience, but being among the youngest people in a room is actually quite nice. And look, I know that 'Clubland' is hardly musical nirvana but after what I've discovered, I do think that Cabaret doesn't have to be a dirty word.
Posted by Unknown at 7:48 PM