It's an age old dilemma - do we choose quality or quantity, width over length?

I'm not sure when it happened in the music industry here, but one day I woke up and agents were telling me that if my band wanted to compete, we had to play longer. The standard - I'm talking covers bands, in pubs and the like - was to perform 3 sets of 40 minutes. But then some bands started offering to do 4 or even 5 sets of 45-50 minutes for the same fee and of course many agents and venues were hiring them instead. Fast forward to now - those same venues are saying: 'Live entertainment doesn't work - it doesn't bring in the punters'. 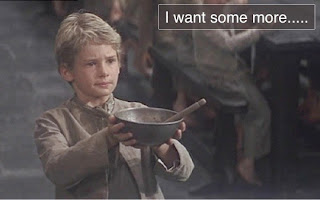 Well I disagree - 'Rubbish entertainment doesn't work'.  And even good entertainment wears thin after about 3 hours. There is such thing as too much of a good thing. People go out to socialise and that's hard to do with almost constant live music. It gets to the point where punters have had enough, the excitement wears off and they drift off to talk to their friends in another room or tune in to the delights of the one arm bandits. Live entertainment then becomes little more than elevator music. And that's no fun for the band either - without a dedicated audience it's hard to give a great performance. And while stomping the stage is an exhilirating thing to do, it is also physically and emotionally draining (when done well) so after about 3 hours the audience is not getting the best out of a band anyway.

We all want the best value for our money but I think PT Barnum of the 'Greatest Show on Earth' (Barnum and Bailey Circus) knew a thing or two about great entertainment. He said 'Always Leave Them Wanting More'.