For Singers: On Being a Bitch

Since it's the season of goodwill, I thought I'd talk about the importance, as a singer, of being nice. Niceness is underrated. People almost have an expectation of diva-ish bitchy behaviour from female singers, especially if there's more than one of them on the same stage. I ran 'PopTarts', a weekly female singer-songwriter night, for almost 10 years - dealing with female artistes en masse - and I completely disagree that un-niceness is the norm. I was always impressed at the warm camaraderie between the singers and not only do I think it's the right way to be, I think it's good for your career.

I do a piano bar-type gig once a week, largely attracting international tourists. It's quite common for visitors to come and get their photo taken with the piano player and I, at the end of the night. Recently, a family came up to the piano and I got my best smile ready. Instead of posing with us, the mother glared at me, snarled 'excuse me' as she pushed us to the side and deposited her 20-something daughter at the piano. Mother instructed daughter to place her hands on the piano as if playing and then directed her (also snarling) son behind his camera phone, in what became a mini photo shoot. 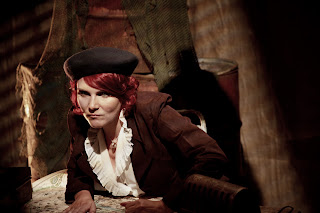 Just after they left, my boss approached us laughing. Apparently this family were his guests this particular night. He had invited them because the mother had enquired after the singing gig for her daughter. The venue hires singers every night of the week so he is always interested in new performers. When my boss sat down with them for a while, during my performance, he asked the group what they thought of me. Apparently they stuck the boot in. There were harumphs and comments like 'oh she's very average'. Perhaps this is what they really thought, but is this the way to get yourself a gig?

Well you'll be pleased to know it didn't work. When the mother asked Bossman when her daughter would be able to start, he said something to the effect of, 'you can have the gig when this singer is finished with it and that could be another 20 years, so don't hold your breath.' Didn't she realise she was not only putting me down, but also criticising the judgement of the person that had hired me, ie Bossman himself? The Maitre d' told me the group had been disparaging of me to him as well! So with all the staff talking about it, and laughing at what they considered their transparent efforts to land the gig, they had managed to absolutely guarantee that no kin of theirs would ever work at that venue.

In any industry, people want to work with nice people, right? It makes life run more smoothly. Anyway, everyone knows Santa strikes naughty people off his present list, so here's to nice!

Merry Christmas everyone,
xAmanda
Posted by Unknown at 11:40 AM